WHO says monkeypox is not yet a health emergency

Ukraine: Russian navy build up in the Black Sea

Footage of the Crimean port of Sevastopol sees two Russia-flagged bulk carrier ships docking and loading up with what is believed to be stolen Ukrainian grain – a scenario in line with accusations by Kyiv that Moscow is “gradually stealing” and trying to sell Ukraine’s food products as well creating a global food crisis by blocking key exports.

The images, by US-based Maxar Technologies, are dated May 19 and 21.

They show two warships – the Matros Pozynich and the Matros Koshka – docked next to what appear to be grain silos with grain pouring off of a belt into an open hold.

The Ukrainian ministry”s Center for Strategic Communications and Information Security said: “New satellite images from Maxar Technologies show stolen Ukrainian grain being loaded on Russian ships in Crimea. There are two ships under the flag of Russia, docked and loaded with stolen Ukrainian grain in the port of the temporarily occupied Sevastopol. “

According to ship-tracking site MarineTraffic.com, both vessels have now left the port. The Matros Pozynich is sailing through the Aegean Sea and allegedly on its way to Beirut, while the Matros Koshka remains in the Black Sea.

It has not been independently verified whether the ships were loaded with stolen Ukrainian grain. However, the fact that the Kremlin-annexed Crimea, unlike the agriculturally rich Ukrainian regions of Kherson and Zaporizhzhia, produces little grain itself would explain the move.

The Matros Pozynich was earlier this month involved in a similar mission: loading up with grain and setting sail out of the Black Sea into the Mediterranean.

It was initially bound for Egypt with its cargo, but it was turned away from Alexandria after a warning from Ukrainian officials, Kyiv said.

It was also denied entry to Beirut, eventually docking in Latakia, Syria, where Russia has for years been supportive of Bashar al-Assad’s regime.

In a further sign of just how far-reaching the effects of Russia’s invasion of Ukraine are, officials have raised the alarm of a “mass hunger” crisis.

Because of cut-off stocks from Ukrainian ports, which once exported large amounts of cereals as well as cooking oils, the global supply has diminished and prices of alternatives are skyrocketing. 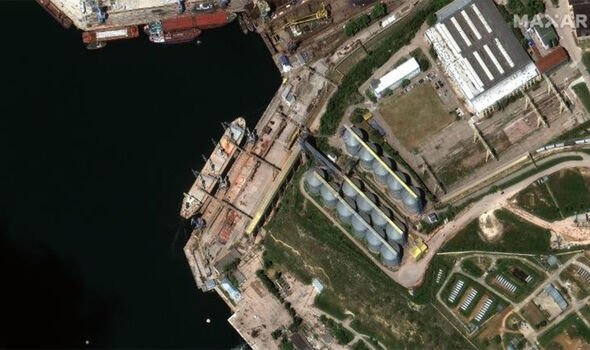 The impact of the soaring prices is due to be felt particularly by poorer nations.

He told reporters: “The world community must help Ukraine unblock seaports, otherwise the energy crisis will be followed by a food crisis and many more countries will face it.

“Russia has blocked almost all ports and all, so to speak, maritime opportunities to export food – our grain, barley, sunflower and more. A lot of things.

“There will be a crisis in the world. The second crisis after the energy one, which was provoked by Russia. Now it will create a food crisis if we do not unblock the routes for Ukraine, do not help the countries of Africa, Europe , Asia, which need these food products. “

His comments echoed those of UN Secretary-General Antonio Guterres, who warned some countries could face long-term starvation if Ukraine’s exports are not restored to pre-war levels.

Globally, food prices are now nearly 30 percent higher than at the same time last year, according to the organization.

Speaking at a UN security council meeting in New York last Wednesday, Mr Guterres said the Russian war “threatens to tip tens of millions of people over the edge into food insecurity followed by malnutrition, mass hunger and famine”.

The effects of climate change and the coronavirus pandemiche added, have contributed to the emergency, too.

Russia and Ukraine together produce 30 percent of the world’s wheat supply and – prior to conflict – Ukraine was seen as the world’s breadbasket, with 4.5 million tonnes of agricultural produce exiting its ports each month.

Mr Guterres said the only effective solution to the food crisis was reintroducing Ukraine’s food production, as well as fertilizer produced by both Russia and Belarus, back into global trading.

He stressed: “There is enough food in our world now if we act together. But unless we solve this problem today, we will face the spectacle of global food shortage in the coming months.”