As of today, we are about to face at least one of the hottest weeks ever for the month of June and of the summer season, with peaks of 38C in the Valpadana and 40 / 43C in the Foggiano and inland areas of Sardinia and Sicily.

Antonio Sanò, director and founder of the website www.iLMeteo.it warned the North will be hit first, followed by the Center and finally the South.

Yesterday saw some Italian cities break the maximum temperature records that have stood since the summer of 2003, with 36C recorded in Bologna compared to 34C in 2003.

In the Center-South, temperatures will begin to escalate from Wednesday and Thursday with maximum values ​​of up to 38C in Rome, 37C in Florence, 40C in Foggia, Matera, Catanzaro, Taranto, and even higher on the inland areas of the two largest islands.

In addition to the heat during the day, the country will see tropical nights, when the night temperature never drops below 20C.

Italy has temperatures as high as 43C amid an African heatwave (Image: WXCHARTS) 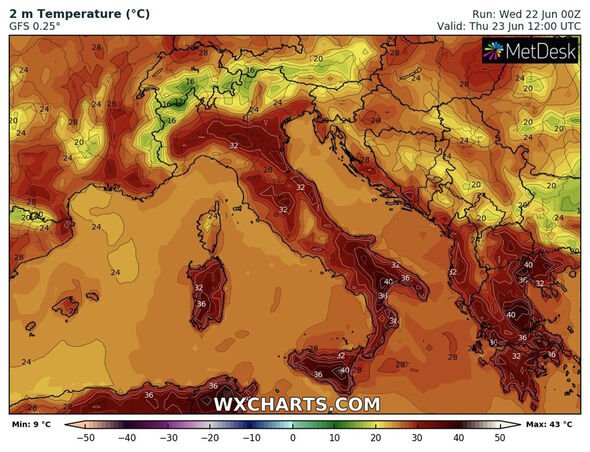 A red and orange alert for hot weather was issued by the Ministry of Health in 10 cities, with the warnings coming into effect from June 21.

Red warnings are in place for Bolzano and Turin, at maximum alert level 3, while orange alerts in effect for Ancona, Bologna, Brescia, Florence, Milan, Perugia, Rieti and Verona.

Today saw the heat increase, with Bologna issued a red alert alongside Bolzano.

In addition, there were 10 cities in orange alerts and 15 yellow alerts. This is what the bulletin on heat waves in Italy reports. 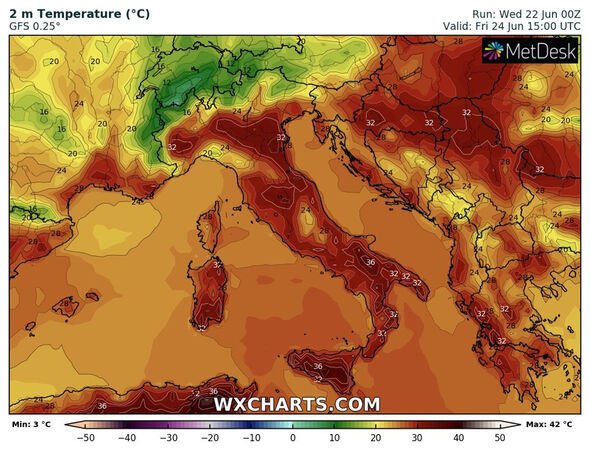 Two red, 10 orange and 15 yellow alerts have been in place for heat in Italy today (Image: WXCHARTS) 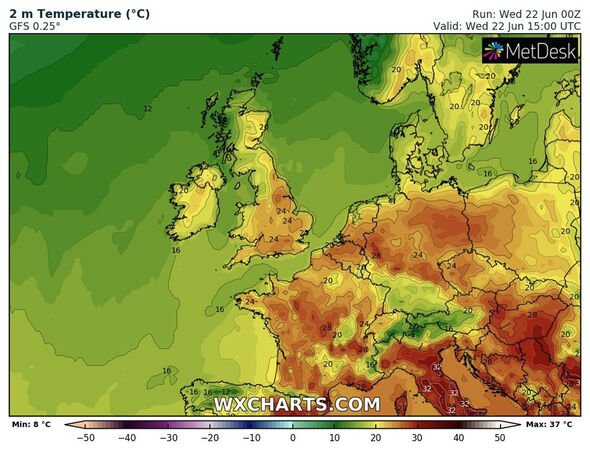 The heatwave across Europe is due to pressure from northern Africa (Image: WXCHARTS)

The scorching temperatures mark Italy’s third heatwave of the year so far, and is due to pressure from northern Africa.

Over the next eight days, highs of 43C in Puglia, 37-38C in Bologna and Ferrara in Emilia Romagna, 41-42C in Caltanissetta in Sicily and Oristano in Sardinia, 38C in Florence and 40C in Cosenza, Calabria are forecast.

Italy’s first heatwave of the year was in mid-May, with highs over 30C caused by an anticyclone named ‘Hannibal’ sweeping in from Tunisia and Algeria.

GMB viewers lash out at remainer protester ‘Get some security!’ 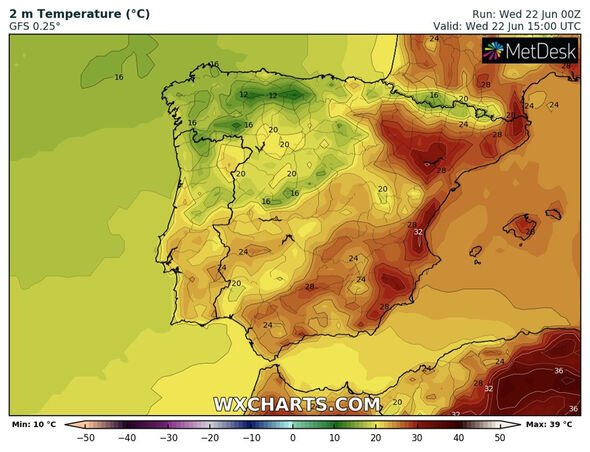 Spain and Germany have suffered wildfires due to the heatwave (Image: WXCHARTS)

Meanwhile, Spain and Germany have suffered wildfires due to the heatwave.

The worst damage in Spain has been in the northwest province of Zamora, where over 74,000 acres have been consumed.

The fire in Zamora was started by a strike from an electrical storm on Wednesday, authorities said

German officials said residents of three villages near Berlin were ordered to leave their homes because of an approaching wildfire on Sunday.

According to WXCharts, Berlin and Frankfurt saw temperatures between 24C to 28C at 3pm.

In Spain, Zaragoza saw heights of 30C, while Barcelona cooking in 28C and Madrid saw 22C. 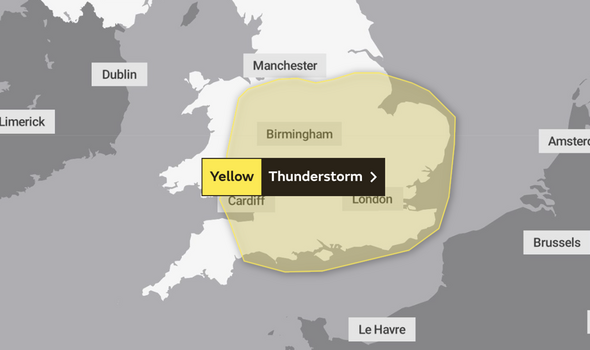 The UK has been issued a yellow warning for thunderstorms tomorrow (Image: MET OFFICE)

The UK meanwhile has been issued a thunderstorm warning by the Met Office for Thursday, after days of heat.

The yellow warning is in effect from 10am and lasts until midnight, and covers much of England and Wales.

The Met Office said: “Thunderstorms are likely to break out in some areas, particularly during the afternoon and early evening.

“While most places will probably miss them, where thunderstorms do occur there is a chance that in a few places up to 40 mm of rain could fall in an hour or so and 40 to 60 mm could fall in two or three hours.

“These torrential downpours may be accompanied by frequent lightning, whilst gusty winds and hail may also affect a few places.

“The exact location of the thunderstorms will be hard to pinpoint, so the warning area will be kept under review and updated if necessary.”